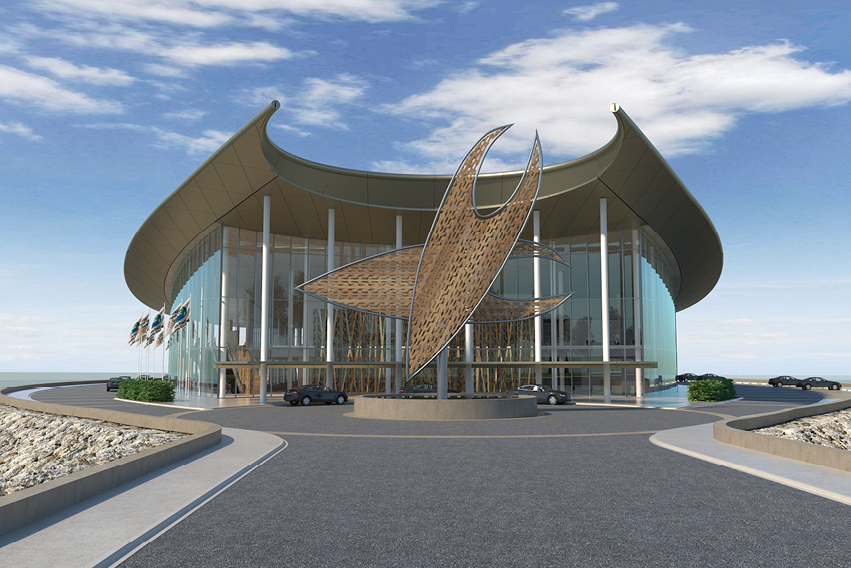 In collaboration with Jim Fitzpatrick Architects, Conrad Gargett has been commissioned for the design and delivery of APEC Haus, Leaders’ Conference Centre in Papua New Guinea.

The Prime Minister, Hon Peter O’Neill CMG MP, has said the APEC Haus will be the centre point of global attention during APEC and, thereafter, will be a national icon used by generations of Papua New Guineans.

O’Neill visited the Conrad Gargett Brisbane Studio for a presentation over the weekend, and was able to make a personal inspection of APEC Haus through virtual reality technology.

“VR inspections will also allow security officials to plan high-level protection measures to ensure the safety of Leaders and delegates who will be using the facilities”, he said.

Prime Minister Hon Peter O’Neill was impressed by the application of the VR technology, giving an accurate perspective of the design.

“It is quite life-like and you can see exactly how the rooms and halls will be established, and how much space there is in the building,” the Prime Minister said.

Built on reclaimed land near Ela Beach in Port Moresby’s central business district, APEC Haus is an iconic design resembling a Lakatoi Sail. Minister for Sport, Mr Justin Tkatchenko, has stated that the unique design of the facility, would rival iconic world sites.

The interior design will also create a unique Papua New Guinea experience using a contemporary palette inspired by traditional materials of the region, shell, clay, timber and metal, to identify different functional spaces within the building.

The project is on track to be completed in August, in time to host the 2017 Leaders’ Summit and the Leaders’ Dialogue with the APEC Business Advisory Council.

It is envisaged that the purpose built convention centre will generate revenue after APEC, by hosting a museum, retail space and cafes in addition to an upstairs function and conference space.

Conrad Gargett is the appointed Executive Architect and Interior Designer, working with Jim Fitzpatrick Architects as the Design Architect, Cardno as the Engineering team and Turner & Townsend Thinc as Project Managers.