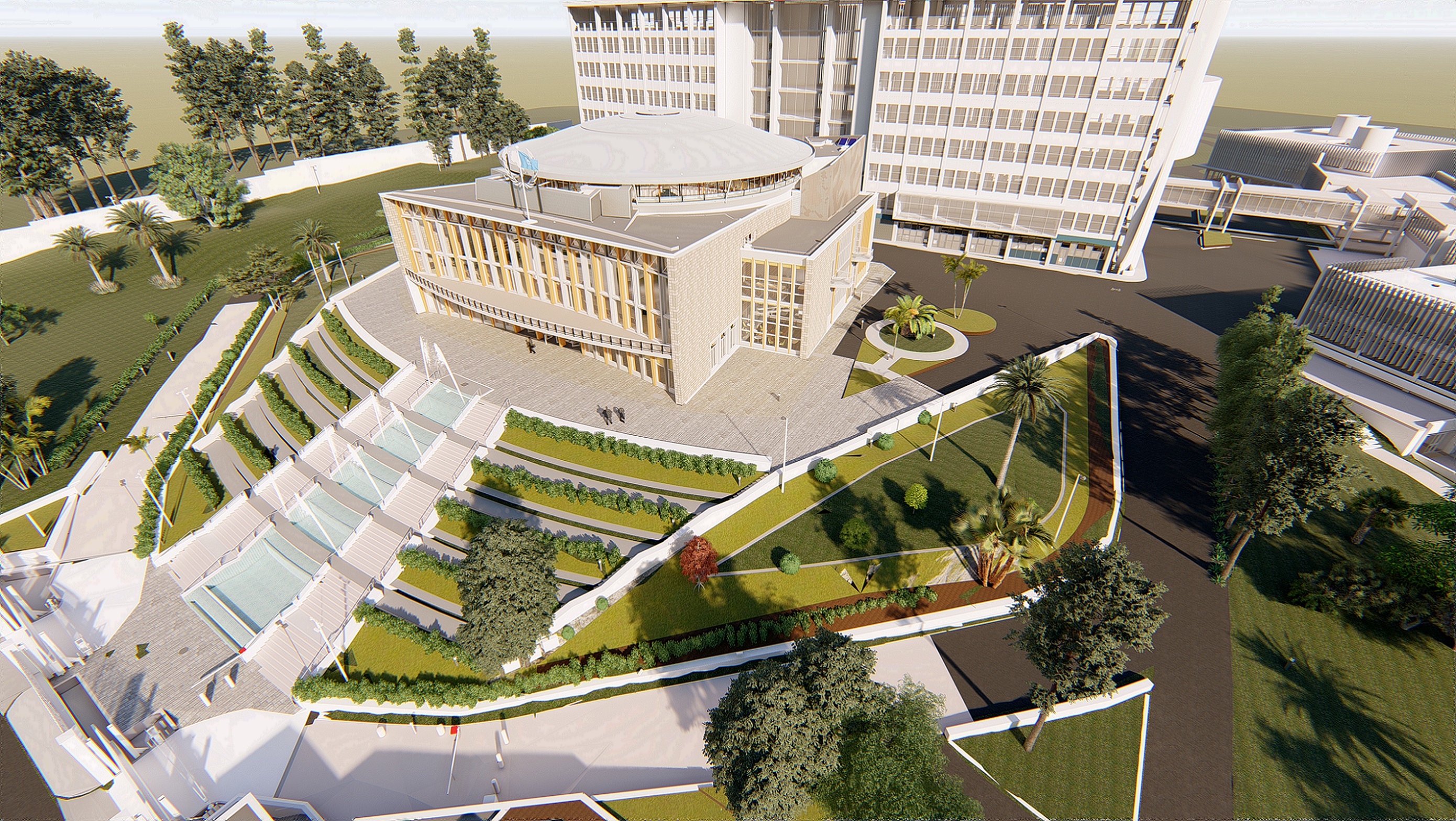 Australian multi-disciplinary design practice Conrad Gargett, who operates a studio in Addis Ababa Ethiopia, commend the United Nations General Assembly for their commitment to fund the modernisation and re-activation of Africa Hall. Signified by a signing ceremony between the Ethiopian Government’s Ministry of Foreign Affairs and the United Nations Economic Commission for Africa (UNECA) on 13 April 2018, USD 57 million was pledged to preserve, restore and modernise the iconic original building located at the UNECA headquarters in Addis Ababa Ethiopia by 2021 to enable it to become a major cultural venue.

Africa Hall, originally constructed in 1961, hosted African leaders in 1963 to establish the Organisation of African Unity (OAU), an organisation dedicated to foster a peaceful, prosperous and integrated Africa. The OAU became what is now known as the African Union in 2012. Overtime Africa Hall has deteriorated. To commemorate the UNECA’s 50th anniversary in 2008, the United Nations Member States announced their intension to renovate Africa Hall and execute the project in accordance with the United Nations General Assembly’s defined scope. In 2014 Conrad Gargett was formally appointed as the principal consultant to deliver architectural and engineering services for the project.

David Gole, Principal of Conrad Gargett with expertise in heritage and conservation, stated, “We congratulate the United Nations General Assembly for their commitment to fund the Africa Hall project. The recent formal joint agreement was a significant milestone towards delivering the project’s principal objectives. This involves addressing building safety and improving the functionality of Africa Hall, whilst retaining and enhancing the cultural significance of the place, celebrating the role the landmark building has made on modern Pan-African political history.”

“Since 2013 we have worked on the conservation, restoration and activation of Africa Hall. The project will deliver state-of-the-art conference spaces and a permanent exhibition space to host diplomatic meetings, cultural performances and art exhibitions from across Africa, as well as a visitor’s centre to enable for the first time the public to access the building. The precinct will be beautifully landscaped to further enhance the place as a major international tourist attraction for Ethiopia.”

Conrad Gargett Senior Associate architect Luke Pendergast, who leads the Conrad Gargett studio in Ethiopia, stated, “The focus of the Africa Hall project is conservation, safety, accessibility and modernisation. All upgrades to the buildings and site have been detailed to be sympathetic with the original design, integrate and enhance site infrastructure, be cost effective and align with current international best practices design guidelines and construction codes.”

Pendergast explained, “The Africa Hall building, designed by regionally influential Italian architect Arturo Mezzedimi, is modernist in style and constructed primarily in reinforced concrete. Inherent with concrete structures over 50 years of age, the fabric begins to deteriorate and requires remediation. Invasive structural works are required to ensure the building can be safely occupied, resists seismic activity and provides equitable access to all. A complete upgrade of technology, services, finishes and fixtures will ensure that Africa Hall is improved to align with today’s standard of international contemporary conference and exhibition facilities and offers long-term economic benefits.”

As an integral part of the design process, Conrad Gargett utilised digital cloud point technology to record current conditions, which allowed the team to efficiently produce accurate documentation to support the restoration of Africa Hall. The team produced a detailed 3D model of the proposed design, which facilitated fly-throughs and 3D images to be produced, which enabled the project stakeholders to visualise and confidently contribute towards project outcomes.

Managing Director of Conrad Gargett Lawrence Toaldo highlighted, “Our practice is experienced with the empathetic and careful restoration, preservation and adaptive repurposing of heritage and cultural buildings and sites of significance both in Australia and overseas. Africa Hall is an iconic place-making landmark and we recognise its strong contribution to Pan-African history and the identity and role of the UNECA in the post-colonial development and transformation of Africa. Conrad Gargett is privileged to contribute towards making this place an enduring cultural and community precinct for the people of Africa and foster international tourism.”