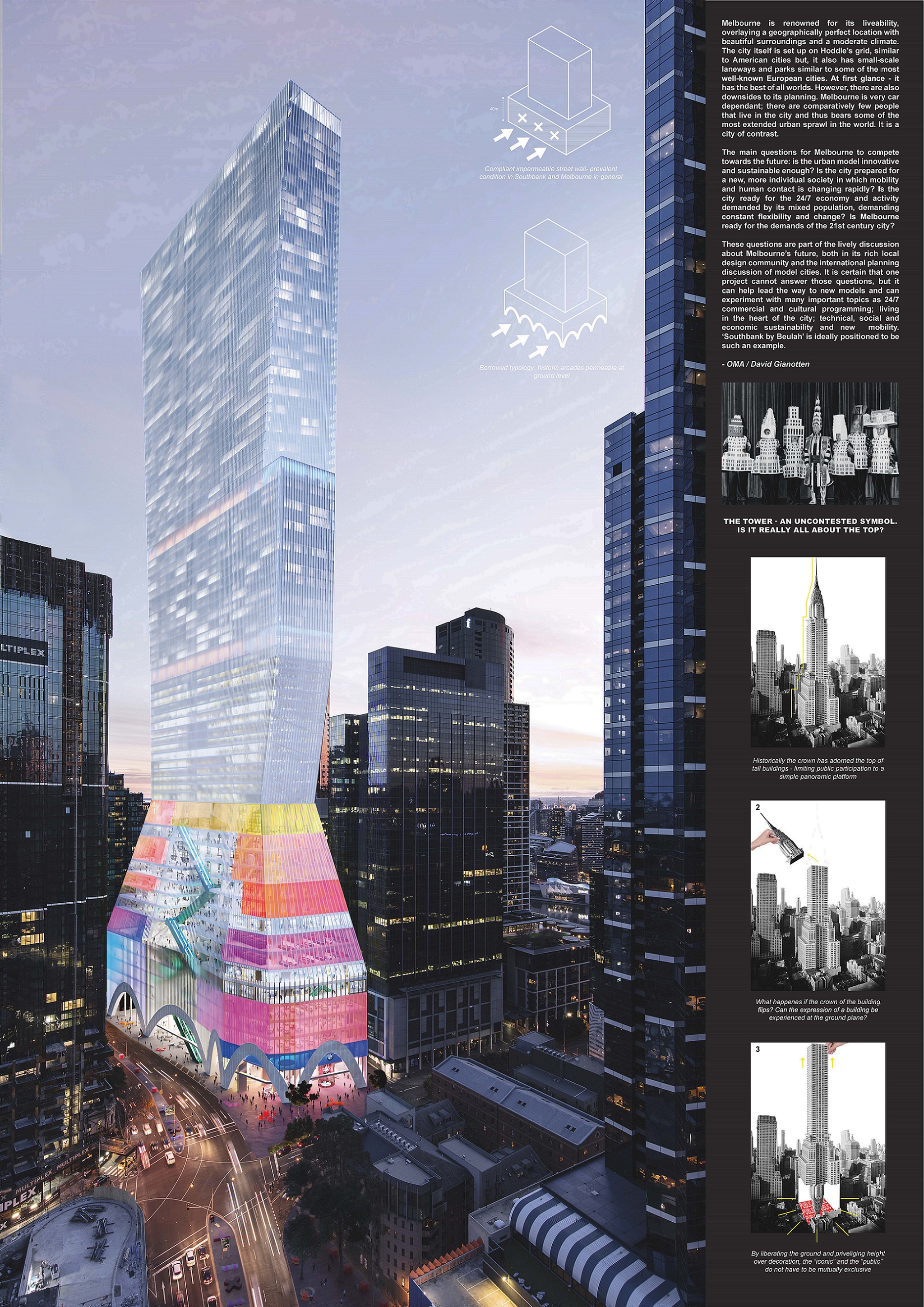 OMA’s entry for the Southbank by Beulah tower competition has been revealed to the public by lead designer David Gianotten at the Future Cities symposium in Melbourne. At a height of 345m and total GFA of 255,000 m2, the project would be the largest building that OMA designed after CCTV.

OMA’s design proposes a tower stemming from a base that acts as a 24/7 mixed-use vertical city with cultural, commercial, educational and social program elements bound together with the more generic programs of retail, food and beverage. In this vertical city, there are highways of movement through large express escalators, shortcuts by elevators, and laneways to wander on through normal escalators, stairs, and voids. The Base follows the outline of the site and then tapers back to a slab 100m above the city. In this volume, different programs are distributed strategically to create dynamic vertical movement, and are rendered distinguishable from both inside and outside through façade elements of dichroic, polarized, and see-through colored metal mesh laminated glass. Open arches at street level, inspired by the Italianate arcades of Melbourne, invite the public into a vertical wonderland of discovery: a sheltered extension of both the street life surrounding the building, and of Melbourne itself. The Base includes the BMW Experience Centre, positioned on the corner of Southbank and City Road.

The tower is divided in three sections: office, hotel and residential. The office block sits right above the Base so that a significant number of lift banks is no longer necessary for the vertical transport in the hotel and blocks. The flexible floor plates offer grand views of Southbank and City Road and include green areas on each floor on the corners facing the east and west ends. The hotel block consists of 17 floors including two amenity levels at the top and bottom of the block. The residential part of the tower is deliberately situated at the top to capitalize on views and daylight. The gentle twist at the top of the residential component not only provides the tower with an iconic and elegant silhouette but also enhances the quality of the residences with views towards Port Philip Bay and the Royal Botanic Gardens.

The project is led by Managing Partner-Architect David Gianotten, Australia Director Paul Jones and Project Architect Roza Matveeva, in collaboration with Conrad Gargett and Arup. The outcome of the competition is expected in the coming weeks.