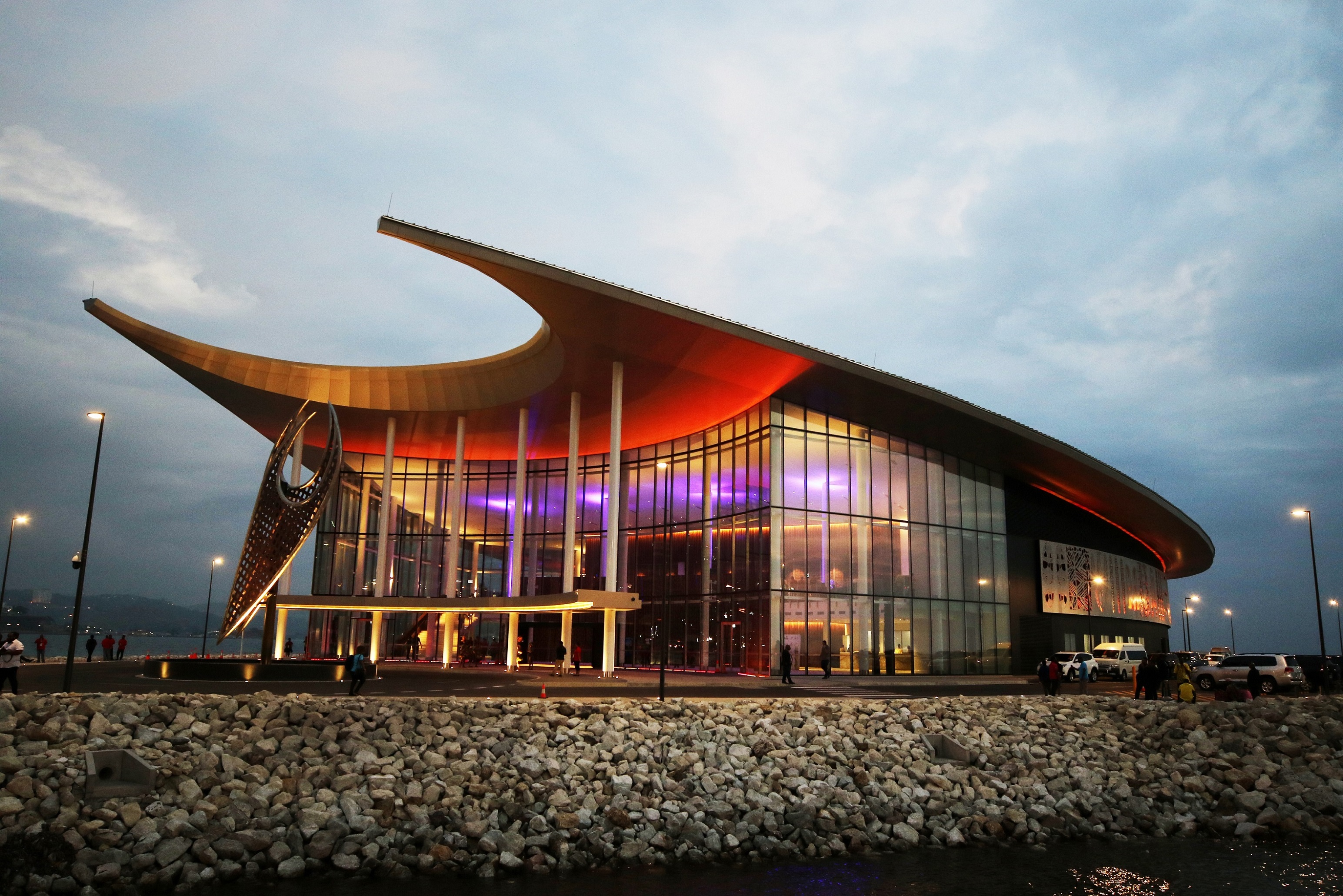 Australian design practices Conrad Gargett and Jim Fitzpatrick Architects have proudly collaborated on a civic and community project for the Government of Papua New Guinea (PNG). Formally known as APEC Haus, the building was officially handed over to the PNG Government on 18 October 2018.

APEC Haus has been designed and constructed on reclaimed land extended as a peninsula into Walter Bay, connected to the Ela Beach foreshore which underwent a major redevelopment. It is seen from PNG’s capital Port Moresby, as well as the adjacent hills and properties, as an integrated landmark within the area’s landscape.

From 12 – 18 November 2018, APEC Haus will feature on the global stage to host the 21 Pacific Rim member economies when they gather for the Asia-Pacific Economic Cooperation (APEC) 2018 Leaders’ Summit, an annual meeting. APEC Haus is the second purpose built facility for APEC, the first being delivered in South Korea in 2005. APEC is a regional economic forum established in 1989 to leverage the growing interdependence of the Asia-Pacific, aiming to create greater prosperity for the people of the region by promoting balanced, inclusive, sustainable, innovative and secure growth, and by accelerating regional economic integration. Members include Australia, Brunei, Canada, Chile, China, Hong Kong, Indonesia, Japan, Republic of Korea, Malaysia, Mexico, New Zealand, PNG, Peru, The Philippines, Russia, Singapore, Taiwan, Thailand, USA and Vietnam.

Conrad Gargett, executive architect and interior designer, who was engaged by Oil Search for the design, documentation and delivery of APEC Haus, collaborated with Jim Fitzpatrick Architects, the design architect and design director acting on behalf of Oil Search. Conrad Gargett provided full architecture, interior design and graphic design services and were novated to the construction company CPB Contractors to complete the documentation and construction phases of the project.

Conrad Gargett’s Managing Director Lawrence Toaldo stated, “Almost two years have passed since we first met with Prime Minister O’Neill in Port Moresby when APEC Haus’ initial design concepts were presented.” “We are proud to contribute to this iconic project which will become a legacy building for the people of Papua New Guinea.”

In March 2017 PNG’s Prime Minister Peter O’Neill previewed APEC Haus using virtual reality technology when he visited Conrad Gargett’s Brisbane studio in Queensland, Australia. At that stage O’Neill proudly stated, “We are building a very functional but unique conference centre that will be cost-effective to build and will generate revenue after APEC 2018. Current expectations are that after APEC 2018, the building will host a museum, some retail space and cafes in addition to an upstairs function and conference space,” he highlighted.

The design has considered the function of the building post-APEC 2018, creating a world-class space that will serve the people of Papua New Guinea into the future. O’Neill stated, “We are already seeing families and joggers use the area around Ela Beach and Paga Hill for recreation. When these new developments are complete [delivered on 18 October 2018], we will see this area around APEC Haus becoming a major social hub for local residents and also for the increasing number of tourists who are coming to Papua New Guinea.” The intension is that the APEC Leaders Meeting Room will be retained for future activation.

Through design, APEC Haus symbolises the historic and sustained progressive trade and civic ambitions within the Papua New Guinean region. The trading tradition of the Motu-Koita culture (the people of the south coast of PNG) has informed the design of the building. It depicts the crab claw shape of the Lagatoi, the Motu-Koita’s distinctive double-hulled boat. The dominant sculptural roof form is a contemporary reference to a traditional Motuan ‘Lagatoi’ sail, recognising Motu-Koita culture and hiri trade. The referencing of local design traditions extend internally, with a wooden feature wall in the lobby engraved with a stepped tattoo design. The timber entry screen depicts the motu facial tattoo pattern in the panelling layout. The interior design reflects the PNG experience, using a palette inspired by traditional materials from the region (shell, clay, timber and metal) which identify functional spaces within the building.

Conrad Gargett recognises the significant role that civic and community architecture delivers in the social, economic, cultural and structural fabric of environments. The practice has a portfolio of delivering public architecture, including offshore projects such as Africa Hall in Ethiopia, with many projects becoming iconic landmarks for communities, lively places for locals, enticing visitation and stimulating the economic prosperity of regions. Conrad Gargett has been privileged to contribute to APEC Haus, a significant legacy building for Papua New Guineans, for generations to come.